You are here: Home » Poker Blog » Tony G Knows How To Grab Publicity 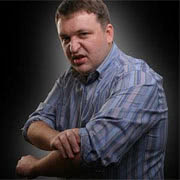 TV producers know that sometimes the best form of entertainment is not all about getting the best people. Anyone that needs reminding about this only has to think about Big Brother. With a few notable exceptions, the heavenly Orlaith McAllister being one of them, the people who appeared on Big Brother are the sort of people you would cross the street to avoid if you saw them heading towards you.

However, they certainly made for great TV at times and this was possibly the thinking behind the filming of the PartyPoker Big Game VII in the Casino Barcelona. This event was being filmed on behalf of Sky, who plan on showing it at some point during the summer. When there is no football on the channel every hour of the day they have to fill their air time any way they can and poker will definitely help! You can also bet that they’ll be working Charlotte Jackson a lot harder than they are now to get more people into poker but that is all for another time.

If they were hoping for controversy, they certainly got it when Tony G started to wind up all and sundry around him with Tobey Lewis, IveyPoker pro, getting the worst of it.

Tony G obviously felt that Lewis was going to straddle in order to raise the stakes but when he didn’t, he was quick to criticise the player. Tony G started shout shouting at Lewis;

What are you doing? What’s going on? There are no scammers here. You’re a disgrace. You should get your chips, get up and leave.

As everyone else started to look rather embarrassed Tony continued, roping in Warren Lush, the organiser by saying;

He’s a disgrace. Where do you get these jerks? Where are these nits from?

Tony G then returned his ire to Lewis, saying;

What is IveyPoker? Is it another scam? Ivey is a gambler; you can’t put that logo on. You are representing a brand that’s all about gambling and giving people a chance. He’s saving his €100 for the bus fare home.

Some people like to get headlines and attention for the sake of it and Tony G is one of these people. However, at this moment in time, Tony seems to be working rather hard at promoting his sports betting site and casino site. Tony made a big announcement in March 2013 that he was leaving his sponsorship deal with PartyPoker. This had been a good arrangement for Tony and the online poker room with both parties benefiting but it seems as though Tony was facing up to a conflict of interests. It wouldn’t be great to promote PartyPoker when you spend the rest of your time telling people to spend their hard earned cash on Tonybet.com and Tonybet Casino!

As of yet there is no online poker site for the site, although there are mobile elements and you cannot think that Tony is missing a trick here. Perhaps there is something on its way and Tony will soon unveil a poker site where people can come from far and wide to challenge him and the rest of his team. You have to think that there is a challenge between Tonybet Poker and the IveyPoker players along the lines somewhere!