It has to be said that the GUKPT is becoming one of the biggest and most celebrated UK poker tours at the moment. There is a huge level of interest in these events and even though Thursday in Reading got off to a slow start, the turnout on Friday was huge, bumping the numbers at the event to a rather large level. While numbers aren’t everything, quality should always be more important than quantity, it is important to know that the poker playing community are buying into what is on offer and are enjoying what is being served up to them. The recent success of the GUKPT season will hopefully convince the organisers to keep going and hopefully there will also be other poker people looking at this success and wondering if they can get involved with events too.

There is no reason to think that you can just parachute into providing a great poker event from nowhere though and while the GUKPT is one of the big stories at the moment, it is not as if it has been an overnight success. There has been a considerable amount of work and effort placed into these events and that is why it is good to see the organisers are reaping the rewards.

A great deal of excitement at the final poker table

One player that is definitely reaping the rewards is James Martin and this is because he was the winner of the GUKPT Reading event. The final table at the Reading event was a rather exciting one, eventually, and there were four different players who held a chip lead at some point. Given the fact that there was no loss of players in the first 90 minutes, there was a lot of tension building but as per usual, as soon as one player cracks, the action really starts to get excited and more interesting. The first player of the final table to head home was Paul Dunne. Dunne was out in 9th position and would take home £1,650 for his efforts. This is not a bad take-home prize for a good weekend of poker and while Dunne would have been disappointed at being the first player to go home out of the final table, he should be happy with what he achieved. 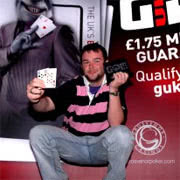 After Dunne made his exit from the GUKPT Reading event, the rest of the goodbyes were as follows. David Lloyd was the next player to go and his 8th place finish saw Lloyd take home £2,270 for his trouble. In 7th position was John Burberry, who managed to grab £3,090 for his work. In 6th place was Alex Zeligman, who received £3,920 for his work in Reading. The fifth place player was Timotheos Timotheou who managed to take home £4,950 for his poker playing exploits in Reading.

At this point the drama was really starting to build and the player that crashed out in fourth position was Adam Howlett, who goes by the name of ‘Buzz’ in the poker community. This left three players and all of the players were guaranteed a minimum of £10,000 from the event. The last remaining female in the event finished in third place. It was a great showing by Ellie Biesske in finishing third and grabbing £10,520 but she will no doubt be a little bit disappointed to crash out so close to the big final showdown.

The top two players managed to reach agreement about the cash and both would be taking home a guaranteed £18,000. This left just over £4,000 to play for and of course, the title and glory that goes along with the GUKPT Reading event. The gallant runner-up was Jeff Kimber, who would have to console himself with that £18,000 prize. The additional £4,640 that James Martin picked up would have been a great reward but the prestige that goes with winning the event and of course picking up a seat at the Grand Final of the GUKPT season will no doubt have meant a lot more.

It isn’t too long until the next GUKPT event and the glamorous setting of Walsall is the place to be between the 7th and 14th of July if you are looking to take part in what is becoming a hugely important UK poker tour.